This blog is called Walking Arizona because I have spent a large part of my life walking. Segovia is a walking city. It is very difficult to drive anywhere in the city, but it is easy to walk. We are getting older and walking, along with everything else involving physical activity is getting more difficult. I suppose that some day, I will be left with only the memories of places such as this one.

Posted by James Tanner at 7:16 AM No comments:

A Path in the Desert 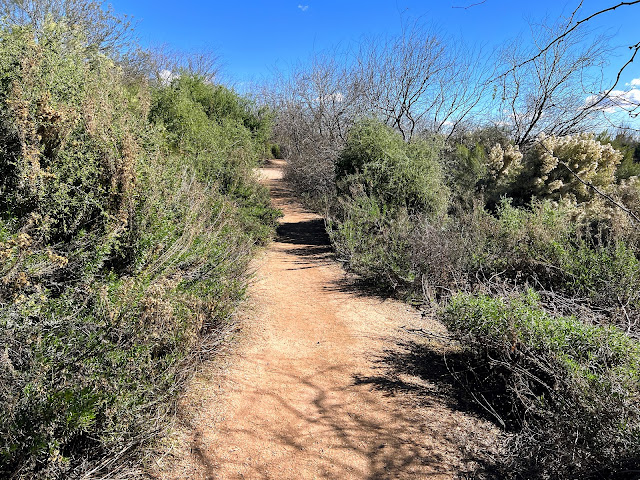 Taking a break from the winter snow of Utah Valley, we visited the Gilbert Water Ranch in Arizona. The large water basins are surrounded by lovely walking trails. It was a lovely day with almost perfect weather. Some of the trees in the desert do lose their leaves but most of the plants do not.
Posted by James Tanner at 6:04 AM No comments: Most of the world probably thinks of Disney's version of a castle when they even think about one. Here we have a real castle with a moat and all the trimmings. This is what I think of when I think of a castle. The castle was constructed in the 15th century and has been considered to be one of the best examples of Spanish Mudejar brickwork which incorporates Moorish Muslim design and construction with Gothic architecture. By the way, here is what Chat.OpenAI.com had to say about the castle.

Coca Castle is a castle located in the town of Coca, in the province of Segovia, Spain. It is a well-known example of the fusion of Moorish and Gothic architectural styles.

The castle was originally built in the 11th century by the Moorish ruler Almanzor as a military fortress to protect the region from Christian invaders. It was later expanded and renovated by the Catholic monarchs Ferdinand and Isabella in the 15th century, adding Gothic elements such as pointed arches and ribbed vaults.

As a result, Coca Castle is an interesting blend of both Moorish and Gothic architectural styles. The castle's exterior features the sturdy, fortified walls and towers characteristic of a military fortress, while the interior includes Gothic details such as pointed arches, ribbed vaults, and decorative plasterwork.

Today, Coca Castle is a popular tourist attraction, offering visitors the chance to explore its history and architecture, as well as to enjoy panoramic views of the surrounding countryside. It is also a popular venue for cultural events and celebrations.

Is this better or worse than quoting Wikipedia?

Posted by James Tanner at 12:16 PM No comments: 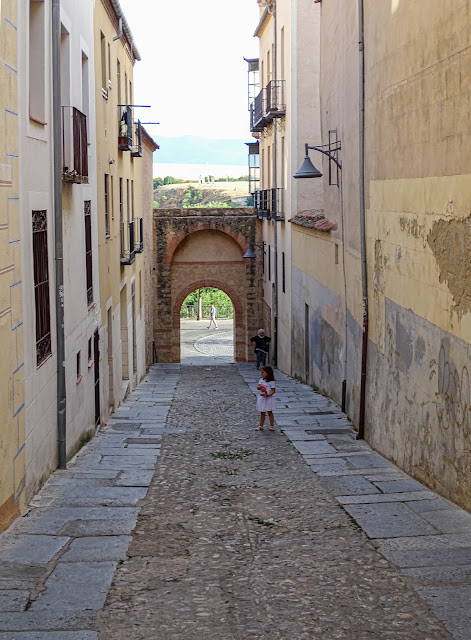 Una calle estrecha is a narrow street. This narrow street happens to be in Segovia, Spain. Sometimes I walk a lot further abroad than just Arizona and Utah. Unless the world settles down quite a bit, we will probably spend most of our time walking around Arizona and Utah from now on.
Posted by James Tanner at 12:34 PM No comments:

Walking tours at Mesa Verde National Park in Colorado are a guided, group affair. This is Cliff Palace, one of the most popular tours. The days of wandering around the park without a guide are long gone. I generally stay to the back of the group because I am taking photos. Most of the park is up over 7000 feet on a plateau and the ancient dwellings are in canyons cut into the plateau. It is amazing to contemplate how people could have built these structures by hand even given the time to do so.

Posted by James Tanner at 6:25 AM No comments:

This may look like the end but if you wanted to climb, you could use both side of this slot to climb up and over the chocks (rocks that fall down into the canyon) but that would depend on whether or not there was more canyon or if what we can see through the rocks indicates that this slot is going to widen out into another part of the canyon complex. This lovely slot is a short way past what is known as Sand Dune Arch in Arches National Park, Utah.
Posted by James Tanner at 2:26 PM No comments: 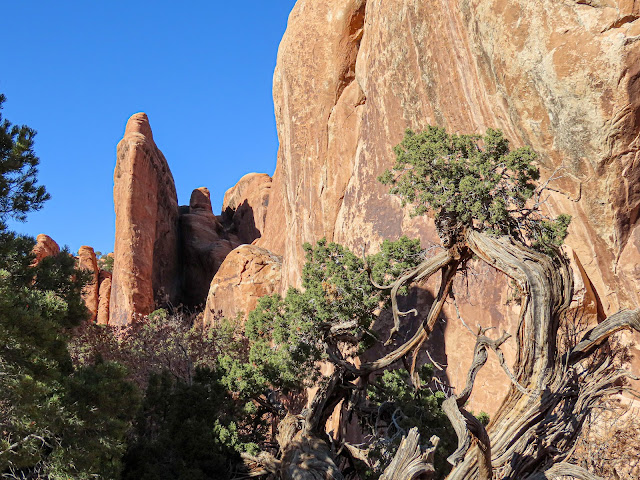 Fins are thin slabs of sandstone weathered into parallel lines. Many of the arches in Arches National Park are formed when erosion makes a hole through the fin and leaves the surrounding rock intact. This image does not show an arch, but the rock formations are impressive enough. I also like the juniper tree that makes its own arch. I have lived with juniper trees (we called them salt cedars) for as long as I can remember. In parts of Arizona, they were considered to be invasive and treated like weeds. The ranchers dragged chains across the desert with bulldozers and destroyed the juniper trees under the mistaken notion that removing the trees would improve the rangeland for cattle. It didn't and the juniper trees are still growing back. But the use of chains and bulldozers hasn't stopped. See "Watch This 25,000-Pound Battleship Anchor Chain Rip Through Juniper in Nevada." The justification for this procedure is to improve the rangeland for species that already live in the area. Here is a link to the counter-argument, See "Old Chaining Page: Chaining in the American West,"

Posted by James Tanner at 5:41 PM No comments:

Arizona and Utah are big states and there is a lot of room to walk. As I walk I like to think. This site is an insight into some of those thoughts during my many years and hundreds, maybe thousands, of miles of walking Arizona and now, Utah. As I walk, I generally take photographs. I hope you enjoy what you see here on this site. If you do, consider becoming a Follower and recommending this site to your friends.

This site features almost exclusively my original photographs. Click on the photos and increase the size of the viewing window, to view them in a larger format. My photography business is PhotoArizona360 part of Bookmark Graphics. Enjoy the photos.
You can assume that unless I give credit, the photos were all taken by me. I am incorporating my photographs from all over the United States and other parts of the world, not just from Arizona and Utah.

Please visit our other Blogs and sites